Anybody else trying this? Tyler Nelson’s wall training for stronger fingers? 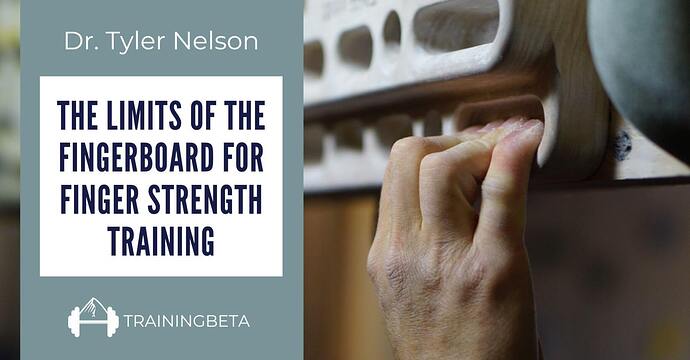 The Limits of the Fingerboard for Finger Strength Training by Dr. Tyler Nelson...

The Limits of the Fingerboard for Finger Strength Training by Dr. Tyler Nelson At first glance, it makes sense why we’ve used a fingerboard historically. Hanging on our fingers with added weight should equal more available force on the climbing […]

I will be trying a three week block of finger strength training protocol using the protocol mentioned above in the article above (and the podcast). Previously I have failed to see strength gains made in hangboarding translate to better climbing, so I am interested in trying something different. I was wondering if anyone else has tried these protocols, and if it worked for them. Also any pitfalls to avoid. FYI - my training age is pretty large so the easy gains from hangboarding are long gone.

We just call it climbing.

Jokes aside, I haven’t read this or listened, but his initial posts seem to contradict his “if you’re always moving slow in training, you’ll always move slow” rants.

He often assumes more force is the goal, but I’m not so sure it is. More often, the goal is to provide no more than the required amount of force, which is usually lower than we think, and to be better at positioning and movement so that we don’t need as much force. That’s been shown true in several experiments I know of with force plates - in which the higher level climbers exert less force on the hand holds and more on the feet.

So I’d just start by asking if more finger strength is something you need, or is it something else? If it’s more finger strength, give it a try. Not much harm I imagine. You’ll certainly improve at that very specific movement style (assuming this is similar to his initial posts) and if that matches up with goals, great!

I had also listened to that episode and thought about posting about it here to hear thoughts and experiences.

I’m curious to try the on the wall strength stuff a bit since I tend to struggle a lot on really small holds on low angle climbing. I’d be interested to know how it goes for you

I honestly find the concentric/eccentric stuff really hard to follow. Maybe I’m just not smart enough but I just don’t really get it

I actually did some of his protocol last spring with some hints of good results, but I haven’t done a dedicated block. So its worth a try. Could I move better, absolutely. But that doesn’t mean I don’t need more finger strength. It’s no accident that all my best sends are in Maple.

It is dense and it is difficult to write something like that, and have it be totally clear without writing like a college text book. However I think the take home point is that after you have been climbing or training for awhile your hangboard max is less a representation of strength and more a representation of passive tension, which may not translate to climbing better (which is basically my personal experience).

My guess is that all of this is needed due to the pendulum swinging heavily toward the hangboard being a tool everyone wants to use, and more often than they need to or should. I’ve always thought this was unnecessary. It’s not that difficult to gain finger strength through intentional climbing, and it’s plainly obvious that what type of climbing causes finger strength to rise vs dip.

Out of interest, what finger strength training methods have you used recently and not seen carryover to climbing from?

I read the article, and my first thought is that he’s working off of quite a few assumptions here. That isn’t to say that there aren’t points that might prove to be valid over time when these methods are put into practice and then tested down the road. I find the idea of doing shorter reps on the hangboard interesting. Mostly because it reflects what people like Yves Gravelle and other grip strength athletes already do to train for their sport.

As for pitfalls to avoid for following this. I’d pay attention to the grip type you’re using during the on-the-wall training. If you want to get stronger on small crimps with a closed crimp position, make sure that’s what you’re doing. It can be easy to default to a more comfortable or stronger position.

I’d also be more intentional with foot choice rather than go fully open feet. That way your repetitions are more replicable. Using jugs vs. jibs or a wide stance vs. narrow will have a significant impact on how much you are loading your fingers. Not that big footholds or wide stances are bad! Both would allow you to grab smaller holds as well as practice putting more force through your legs.

If all I had was a steep wall and I wanted to practice moving in a closed crimp position on smaller holds or in a middle two drag then I’d be using massive footholds, a wide stance, and maybe even drop knees.

If I wanted to get stronger on medium sized holds, pulling more with my arms, and practicing keeping consistent pressure on smaller footholds throughout the entirety of each move then I’d use jibs, a more narrow stance, and maybe even higher feet because that would put more weight into my hands. It would also be a great practice for using high feet (which I’m terrible at).

Neither method is good or bad, just different.

I guess the last protocol I did was weighted hang repeaters (relatively little added weight because they were repeaters). I have done max hangs (good increase in weight hung - no carry over to better climbing), and Steve Bechtel style ladders., and probably some other protocols I forget. I did this summer spend a while doing pinch problems and Moonboard Pinch problems on my small home wall twice weekly (quick very early AM sessions) that did yield improvements. Pinches have always felt like a weakness. And now that I think about I have tried pinch blocks with weights hung off them too (repeaters) , which did not work.
I think your other advice about choosing holds and foot size based on your goals, is a good thing to consider. And on my small home wall the sequences are limited so they tend to get repeated out of necessity. Which does help with tracking progress (or lack thereof) .

If you’re not seeing results in your climbing from most major protocols then I’d be interested to hear more about how you’re doing them. What’s the volume of these workouts, how frequently are you doing them, at what intensity, how many grip positions, and are those grip positions the same as what you use during performance? Also, I’d be interested to know how your sleep is. I’ve worked with people who were in multi-year strength plateaus that were resolved when they finally started averaging more than 5 hours of sleep every night.

Pinch strength seems to be harder to develop than finger strength. The musculature involved around the thumb is a lot smaller than the forearm flexors. From what I’ve seen, it appears to respond better to lower volume than the fingers do because of how fast it fatigues, and it also develops strength at a slower rate.

A question on the protocols you’ve been doing.
How long have you stuck with them?
Like Ned Feehally repeats in his book you need to stick with it for a long time.
I believe that it sadly becomes more important the later in life.

The last one I did had two days of climbing and two days of training (hangboarding/strength). Most of the general strength stuff was in the warm up, and there was hangs at gradually increasing intensity starting at open hand and then moving to 1/2 crimp, 25 total hangs in groups of five (in the warm up) with 30 secs in between hangs. I would usually alternate some form of push/pull/hinge/square excercise in between each set. Workings sets were at 85% max 5:3 repeaters - total of 9 sets of 4 repetitions. I wanna say the whole thing would take about 2 hours, but after the warm up most of that was just resting.
Sleep: Sleep is tricky. I would say I am not a great sleeper. Goto bed nearly the same time every night, and wake up at roughly the same time. And I very rarely set an alarm and just sleep until I am awake which is roughly 6.5 hours a night in the summer and 7 hours a night in the winter. My biggest issue is waking up in the middle of the night and not being able to fall back asleep. Always feel low energy the next day when that happens.

If you haven’t listened to this podcast, you should give it a listen. A lot of good info on improving sleep. 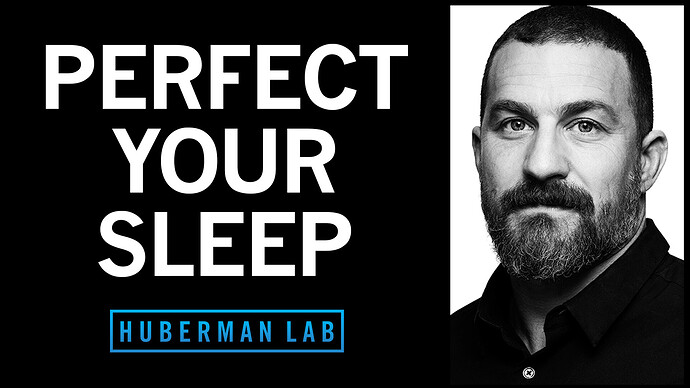 In this episode, I describe a comprehensive toolkit consisting of behavioral and supplement-based tools that you can customize to enhance the quality, duration and impact of your sleep.

If you were doing two hard days of climbing and two days of (what sounds like) higher volume finger training, it’s very possible it was just too much volume for your hands to be able to recover from.